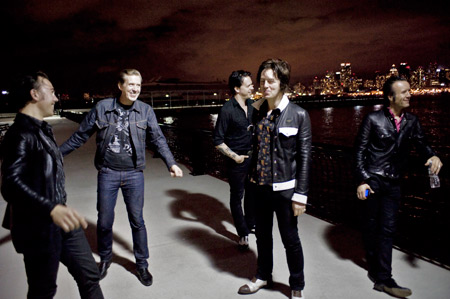 Incendiary blues rock band The Jim Jones Revue have burst back with their third album The Savage Heart.

Notable for their bombastic live shows, the group have gone along way to capture that energy on this release. Produced by Jim Sclavunos of Nick Cave and the Bad Seeds and Grinderman fame, the albums sound is as venomous and as caustic as you would expect, but it has a greater scope over their previous releases. This is due in part to a greater depth to the songwriting and the decision to push newest member Henri Herbert and his barroom style piano higher up in the sound. The pounding piano stabs add a menacing rhythm to many of the tracks.

The opening track It’s Gotta Be About Me, kicks off proceedings nicely with some big riffs carried along by an unhinged and rowdy swagger.

Listen to It’s Gotta Be About Me here:

The sound of the band on this album manages to come off perfectly as both playful and extremely threatening at the same time. This energy travels through the album and when we get to the track Chain Gang the pace slows down to an atmospheric sludge-like grind that gradually builds back the tension.

The album takes a more bluesy course with the songs In And Out of Harm’s Way and Eagle Eye Ball before mellowing for the last track. Lead singer Jim Jones’ voice takes on a gravelly baritone sound very similar to Mark Lanegan on the final song Midnight Oceans & The Savage Heart. The change of pace is a great way to end the record and a reflective counterpoint to the raucous start.

The overall sound of this album is nothing really new, but when it’s crafted and delivered as well as it is here, it becomes compelling. Hopefully this record will open up the band to a bigger following, as the sound has a greater reach than this underrated band currently get.

The Savage Heart is out now and is available to buy from iTunes.

The full effect of the band is best sampled live, try to catch them at any of these dates below: