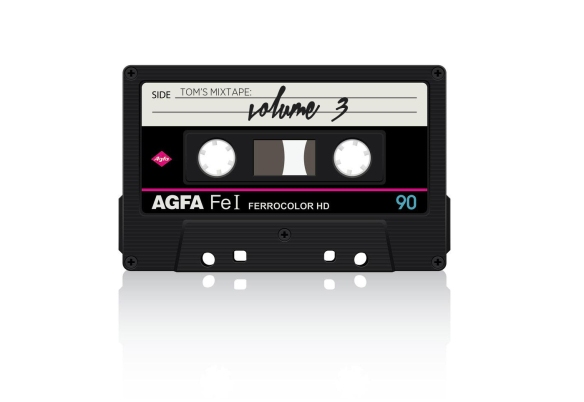 So after a whole month of not posting anything, it seemed like the right time to to compile one of my mixtapes. I’ve tried to keep it quite current, however I couldn’t help from posting some stuff from the last couple of years that may have gone unnoticed – or at least I completely missed until now. So without further ado, let’s kick off with Francois and the Atlas Mountains.

This track had been on my iPod for well over a year until it shuffled its way onto a playlist without my fidgety fingers skipping to another track. The four piece band headed by Francois combine an indie pop sound with African rhythms. This track benefits from a superb instrumental arrangement that gives a truly original and addictive sound.

This 22 year old electronic artist gained some attention when his LP was featured on the new website vinylme.com. His sound reminds me Halls with the synthy beats, and looped vocals. I really like the album art too.

I wasn’t sure whether to post this track or another one of theirs called Girl on a Motorcycle, but it’s the break at 1:10 that makes this one so enjoyable. It’s on my running playlist, and it really helps to keep a good pace going. I’ve been waiting for this artist to release a full length LP; for the last 2 years he’s only been leaking singles out here and there. I strongly suggest you check out his other stuff if you like this.

The smoky vocals and simple riffs make this song very easy to listen to. I’d describe him as a sad M.Ward. His other stuff has more of an electro-pop feel, but I like this track for its simplicity and melancholic lyrics.

This is an easy track absorb. There’s a nostalgic warmth to the intro and Brad’s vocals don’t fail to keep the momentum of the track going. It kind of reminds me of The Hollies for some reason. This track has a high play-count on my iTunes, It’s an easy one to hit repeat.

I recently bought this vinyl, it’s hauntingly beautiful, and this is one of my favourites from the album. I’ve come to the conclusion I love everything this guy does. I wanted to post a track from Lore, a film he recently composed, however it’s not available online, so please take my advice and buy it if you like his stuff.

After much anticipation, Matthew Cooper has finally released a new Eluvium album called Nightmare Ending – and yes it’s fantastic. I was going to post Etendre but since we’ve just had an instrumental track I thought I’d bleed in some vocals to the mix. This song comes from his new album, and is more of a bonus track. Much like Matthew Cooper’s previous album Similes the vocals are subtle and in no way obstruct the beauty of the instruments.

Time to raise the tempo a bit. This Norwegian duo have been pretty big on the blogs recently. If you haven’t heard them, they have been compared to the likes of Daft Punk and Justice. Their punchy, upbeat tracks are extremely listenable and I bet you’ll want to listen to the whole track after the first 10 seconds. I mean it’s only had 288,210 plays on Souncloud already.

So like many, I’m a big Dylan fan, yet every once in a while I hear a track I’ve never really noticed before. Then I listen to it over and over until the words become mush. I shamefully admit I bought the Biograph vinyl pack just for this song, I love it. The track was originally meant to appear on his 1976 album Desire but dropped in favour of another song. It’s a break-up song, but carries the same magnitude as Shelter From The Storm or Visions of Johanna.

This guy sounds quite a bit like Morrissey. The band is from Finland. It’s a good track, that’s all.

Julianna is one of my favourite ambient artists. She’s often the soundtrack to a lot of books I read. This year she’s put out a 7″ which had the tracks Pacing and Call on it, and she’s now set to release her second full length LP.

Another warm nostalgia track; Dana Falconberry’s style is described as orchestral pop-folk. I love the little pauses in this song and her voice works so well with the simple acoustic arrangement.

From The Lake To The Land – Foreign Fields

This track is over a year old, but it was only recently brought to my attention. I instantly liked it, they remind me a lot of Gregor Samsa. The five piece band are from Wisconsin, but now reside in Nashville. This would be the perfect song to play on a rainy drive through the countryside.

With tropical beats and highly distorted vocals, this song has a jungle rhythm and a 60’s psychedelic beat that’s fun to listen to. Palmbomen is the pseudonym for Dutch musician Kai Hugo who’s very recently released his first album, Night Flight Europa. Check it out.