Typhoon, the 11 piece band known for creating a big sound while maintaining an intimate level of storytelling have just announced their new album, White Lighter set to be released August 20th. Their previous album Hunger and Thirst released last year stirred a lot of excitement, in particular their track CPR / Claws Pt. 2 was greatly commended, and is a personal favorite. They have pre-released a track from the new album called Young Fathers which is very enjoyable and hints that the new album is going to be a goodie.

END_OF_DOCUMENT_TOKEN_TO_BE_REPLACED

Back at the beginning of April we briefly covered neo-psychedelic rockers Temples and their rather magnificent single Shelter Song. Martin wrote, “The songs are louder, clearer and chocked full of instantly catchy hooks; unashamedly pulling in retro influences from acid era Byrds to (dare I say it) The Beatles – all brought up to date with some booming, breakbeat-esque drumming.” Now roll on a month and a bit and we can follow that up with their brilliant new single Colours To Life, due out 24th June. END_OF_DOCUMENT_TOKEN_TO_BE_REPLACED

Finally here it is! Without further ado I present you with Brazil, the first single from Gold Panda’s upcoming album Half Of Where You Live. After January’s Trust EP left many salivating for the expected full-length follow up to 2010’s brilliant Lucky Shiner we finally have something to sink our teeth into and a date to pencil into the calendars for that very follow up.

Brazil is hypnotic, full of detail and a joy to listen to. Without a doubt Gold Panda through and through and while not a huge leap from previous material, that’s fine by me. Not many artists have that perfect balance between catchy songwriting and pure experimental sounding electronic bliss. If the album follows suit, fan’s will have nothing to worry about and it’ll be another wonderful record from one of Britain’s current finest electronic musicians.

Additionally there’s a string of live dates coming up, I’ve been before myself and it’s well worth a look in. more details over on the Gold Panda website. 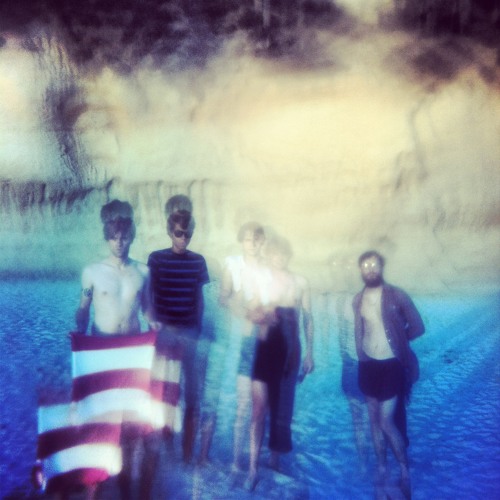 Woods is hitting the road this Spring & Summer, with a May trip to Europe where they will appear at festivals like The Great Escape and Primavera Sound. In July the band will tour the East Coast and Midwest with Parquet Courts, including a return trip to Pitchfork Fest in Chicago. The band will release a new single on July 9 in celebration of the tour, and on the B-side they cover The Kinks’ God’s Children.

I’m a great fan of new takes on older music styles; recently I’ve been enjoying the resurgence in popularity of the neo-psychedelic sound, spearheaded by the success of groups like Tame Impala and The Amorphous Androgynous. Temples are a band that have recently caught our attention – since then, the single Shelter Song and its flipside Prisms have been on heavy rotation here at Universal Wax towers. END_OF_DOCUMENT_TOKEN_TO_BE_REPLACED

Often a bands name is a statement of how they see themselves, sometimes it’s simply to grab the attention or to make a statement. Rarely a bands name is so synonymous with the music; a wonderful embodiment of what you hear and what you read on the page (or web browser in this case). Of course that’s all very subjective, and a sweeping statement of sorts, but take a look at that name, Slowly Rolling Camera, before you hit play and take a few seconds to imagine what you are about to hear. END_OF_DOCUMENT_TOKEN_TO_BE_REPLACED

Directing duo Karni and Saul have collaborated with The Staves to create an absolutely stunning video for the first single from their debut album Dead & Born & Grow (November 2012). It’s wonderfully organic with a mix of techniques including hand drawn imagery and flash animation and gives a brilliant sense of depth and although the woodcut style is obviously an influence it apparently contains no stop-frame animation. It’s a very literal take on the subject and its beautiful animation and quirky characters are charming to behold.

The Staves are off on tour shortly with dates primarily across the UK, with a few European ones thrown in for good measure. Follow this link for a full list. Their debut is out now through Atlantic Records, available in all the usual places.

The album’s due April 1st (2nd in North America), lets hope it’s not an April fools! There’s also some new live dates to accompany the new album, to make things easy head over to this link for a full (and fairly extensive) listing. END_OF_DOCUMENT_TOKEN_TO_BE_REPLACED

While Flying Lotus prepares Until The Quiet Comes for launch in a little under a months time we’re yet again teased, this time visually, with the bizarre yet beautiful short film by director Kahlil Joseph. From the three Flying Lotus tracks on show here; See Thru To U (feat. Erykah Badu), Hunger (feat. Niki Randa) and Getting There (feat. Niki Randa), it appears Steven Ellison has taken Flying Lotus to a whole new level with a thoroughly cinematic feel throughout that may or may not be aided by Josephs exciting and thought provoking visuals. It’s exciting and at a mere three minutes and fifty seconds, all too short.

Until The Quiet Comes releases on 1st/2nd October via Warp Records. I won’t go into too much detail as we covered the album the other month, but below are some tour dates for your diary.

Chris Helme returns with The Rookery, the follow up to the 2008 excellent long player Ashes. Helme is most famous for being the frontman in the post Stone Roses band The Seahorses created by John Squire. Squire had found Helme when one of his longtime guitar technicians discovered him busking outside a shop in York city center. The Seahorses released their album Do It Yourself in 1997 and instantly shot to fame on the back of the then flourishing britpop scene and the prominence granted by John Squire being in the band. After three hit singles and two years of successful touring the band fragmented whilst writing their second album, mainly due to clashes between Helme and Squire over the new material.

Now with the legacy of The Seahorses fading, especially with the reformation of the Stone Roses getting so much attention, it is great to see Helme forging ahead with his solo career.

Returning with a beautiful and more mature tone, the new album follows on from Ashes with a dreamy indie-folk sound, slightly reminiscent of The Coral and early Gomez. The opening track is the instrumental Pickled Ginger, an almost perfect piece of english folk leaving the britpop days of The Seahorses as a distant memory. As the album grows, simple arrangements are bolstered with the gentle use of a string quartet and confident songwriting.

The track Plane demonstrates this beautifully and is a highlight of the first part of the album, showcasing Helme’s soulful vocal talent.

Listen to a clip of Plane below:

This is then followed by the excellent The Spindle And The Cauldron which adds a hint of early Led Zeppelin to the mix, with suitable melancholic vocals about an ethereal mysterious girl at his window.

Listen to a clip of The Spindle And The Cauldron below:

The track Pleased steers the sound in a further bluesy direction with Daddies Farm adding a upbeat edge to proceedings and Set In Stone bringing back the subtle orchestration. The rich layered production of the whole album really compliments Helme’s vocals and it’s amazing to believe that the whole record was produced in just nine days in the Yorkshire dales.

This is a great album, a gentle, laid back journey, expertly crafted with a good mix of soulful ballads and melodic acoustic rock – all held together with some thoughtful lyrics and excellent vocal talent.

Helme has also announced a series of gigs around the country and is well worth seeing live. More information at chrishelme.co.uk