My latest bandcamp find (damn I love that site) is Chicago based Trevor Menear whose blues filled slices of soul have relentlessly been rocking my soundsystem all evening. 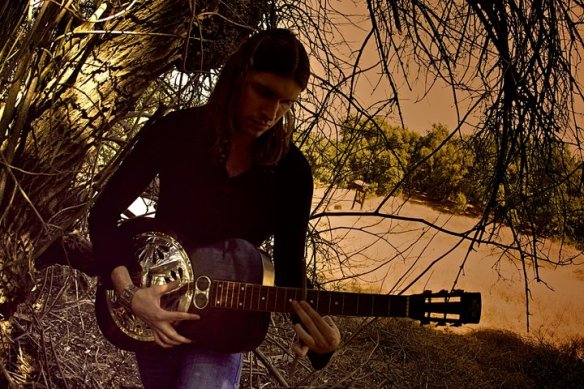 Some Kind of Sunshine was self-released back in 2010 via bandcamp and follows his 2008 debut Introducing Trevor Menear (Shangri-La Music). Infectiously catchy melodies playfully rub shoulders with raw blues guitar and soul filled vocals to a modern rock backdrop. I’d really like to refrain from comparing Menear to other artists but it’s fairly easy to think the raw blues of The Black Keys circa 2008 meets the soul of Ray LaMontagne with a whole lot more variation and ideas thrown in the mix. It’s surprisingly well produced as well, not to discredit Trevor Menear, however it cleverly blends that fuzzy, rough blues tone that bands such a Radio Moscow and Dan Auerbach chase so intently, with quiet acoustics and superb percussion; never sounding over produced and retaining a very organic sound. Album opener River Blues opens perfectly with style and some flowing licks, it’s exciting stuff and builds into a burning guitar solo that sounds thoroughly effortless.

After reading comparisons with Hendrix, and Duane Allman, Menears skills behind a guitar may have a lot to live up to but what really impresses is his restraint on this album. Solos never outstay their welcome, they are written to enhance the song and not purely to show off, something that can and should be greatly admired in songwriters who know their way around their instrument. It’s intelligent writing and only enforces the surprise that this young, talented musician who is not only a brilliant guitarist but proves he’s also an excellent song writer has not been snapped up by a major label already, especially after the recent explosion of The Black Keys into the mainstream of popular music.

Whatever way you look at Some Kind of Sunshine, it is undeniable that it’s a brilliant pop record as well as a superb indie blues record and as a free download (yes it’s free, although we encourage everyone to name a price if they like it and support these artists) it not only deserves to be given a chance but has the potential to spend a long time in my playlist.

Some Kind of Sunshine can be obtained from bandcamp as a name your price download.