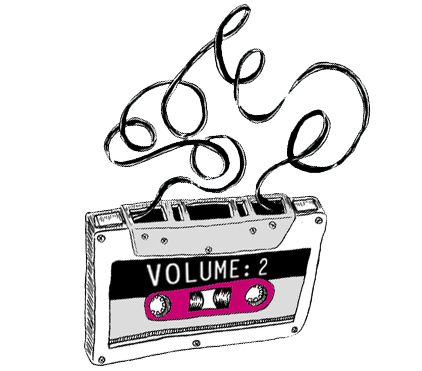 “Isaac Delusion is about two multidisciplinary artists continually exploring new musical landscapes”. This is where techno and folk meet and produce super cool riffs complimented by smooth non obtrusive vocals. It’s going to take a while before I get bored of this track. Their EP Midnight Sun was released this year, and will be closely followed by their second, Early Morning which is soon to be released.

Trampled By Turtles are set to release their 6th album in November called Stars and Satellites. With their highly successful track record in the Bluegrass scene there’s no doubt it’ll be a hit. Following the formulas of traditional folk and fiddle songs, and using a wide range of instruments their sound is timeless and full of soul.

This artist has quickly become one of my favorites; I could imagine them being a product of David Lynch. I like to think Sam Herring’s voice is a mixture of Tom Waits and Cat Stevens. The band have very recently released a 7″ single, after their successful album, On The Water (2012). The deep repetitive beats and synthy swirls – not to mention Sam’s scream-like roar half way through makes this song as wonderfully weird as the rest of their stuff.

Alex Church has been recording under the name Sea Wolf since 2003, and has been successfully pioneering the solo project since. He has a new album that’s yet to be released called Old World Romance and is currently on tour in the states. This track, Our Friend, is a sneak peak of what’s to come from the new album – and it’s very exciting.

Daniela Gesundheit AKA Snowblink has an extremely listenable voice. It’s the simplicity of this track that had me hooked. Delicate layers of beats and synths overlaid with vocals which sound a bit like Amiee Mann make it so enjoyable.

Can’t Get Enough – The Sweet Serenades

I love the voice at the beginning of this song, it sounds like a burp. A band that’s descibed as, “Hip swaying, knee twisting, & finger snapping goodness”, this is a good wake up and walk to work track. The Swedish band’s manifesto of creating ‘unpretentious pop songs that make you feel cool’, doesn’t let you down here.

Pop tunes infused with ambient and experimental texture, Pandit is the work of Lance Smith. I haven’t heard a bad song from this guy, and considering These Days is one of my favorite songs, Pandit’s cover is spot on. He has a new EP coming out at the end of the month, so keep an eye out for that.

Hang on to Me (Daytrotter) – The Wooden Sky

I’m a huge fan of the Daytrotter Sessions, they often bring out better, more heartfelt sounding recordings than the originals. This is definitely the case with this Wooden Sky track. Taken from their latest album, Every Child a Daughter, Every Moon a Sun (2012), Hang on to Me is just one of the many great tracks from the album.

Their synth-pop beats have a similar sound to Pheonix. This track is taken from the 2011 album, Many Moons. It’s a good track to stick on as a party winds down and the sun rises.

Here’s something different; Brazilian shoegaze. I actually prefer this version of the track to the original Ghost Beach track. Covers can often come off as sounding like the original with less instruments and slightly awkward vocals, but when a band gets it right – it can transform a song into their own which is exactly what they’ve done.

Since 2009, Ernest Greene’s project has received a constant stream of positive reviews. This track, New Theory comes from his first EP, Life of Leisure which launched him. 2011 saw the release of Within and Without, his first full length album which received startling reviews all round.

This is a random Bandcamp find, with similar vibes to Imaginary Johnny, this is an easy song to get into. He’s currently touring the states with his new album, Catholic Guilt or the Queerest of Thoughts.

Steve Marion has flooded blogs recently with Positive Force. His music sounds as though he wrote lyrics and then decided the guitar should sing them. It’s cocktail of Ratatat and Animal Collective.

Short and sweet, this track encompasses all that’s great about low-fi songwriting. Although it seems Patrick Ebermann’s project HORSES has evaporated. Now appearing under the name Bronson, the album Paper Tusk was released in 2011 and Golden Palms on this is different to the original – a bit overworked in my opinion. Here’s the original.

This one’s a grower, resist yourself from skipping it before the first minute. The sparse piano and seldom drums slowly intwine themselves into a beautiful melody which Doe Paoro sings through. The original song naturally has unusual vocals from Sam Herring, and so this Kate Bush sounding twist fits perfectly.

Sibylle Baier is a German folk singer, she sounds like a sad Nico – and I mean that in the nicest possible way. I love this song, its intimate sound makes you hang on every word. She’s quite a mysterious person, the homepage of her website reads:

I (her son Robby) set this site up for my mother…Sibylle will most likely never see this site. She is really quite perplexed by all the attention that her album “Colour Green” has gotten. My father keeps telling her about all the pages and articles that are out there, but she, though smitten, prefers to hear about her accolades through the eyes and ears of her family. The web makes her dizzy, I think.